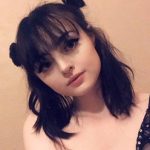 Bby9irl is a fresh young 19-year-old face that I’m fortunate to get to work with.  So cute she looks like an anime doll, and with such a sweet personality I feel bad about strangling her, and yes that’s saying something.  She is a joy to work with, meaning I want to do it frequently, meaning you need to buy her stuff so she’s inclined to work with me too!  All sales links on this page are for movies owned by her and go straight to her sales account.

Look her up at:

This is perhaps the best tiptoe movie I’ve done to date.  She’s noosed up in a plain rope noose, put atop the picnic table and pulled up on her toes.  It was only supposed to be a little torturous for realism, but it turned out a little rougher than planned.  In the close-ups she actually has tears streaming down. (I swear I didn’t notice those until we were done.)  But I don’t feel quite as bad as I would ordinarily because the money from this is all hers.  And right at this moment she’s trapped at home like a lot of us are, so she can use it.

There’s no cutting between views, just one continuous camera view going all around getting every good angle.  If you like feet there’s some close-ups of those too.  After seeing how well this turned out I plan to do more like this in the future too!

Going to confess, I was accused of taking things a little too far with this video.  We agreed, on video, that we’d be stretching her limits of how much hanging she could handle.  I maintain that I stayed within the bounds of what we agreed to, but she disagrees and so does her lawyer, so before this got too expensive I agreed to give her ownership of the movie.  The buy link goes to her selling account.

Her legs are strapped at the knees for the squirmy look, and also so she didn’t crack her toes on the weight rack.  She does a lot of serious gasping for air as she dangles.  She gets lifted for a short breath every so often, then let down again after just a couple seconds, so the strain and panic keep building toward the end.  Then finally she dangles for a few seconds longer and blacks out briefly.

If realism is what you like then you’ll love this one.  So even if I’m not making money from it, please buy it to help keep me out of trouble and in business!

Bby9irl is subjected to the greatest torture ever devised, the tiptoe hanging.  Her tiny, squirmy body is oiled up shiny, pulled right up on her tiptoes and left there to suffer and finally expire.  You don’t have to imagine what it’s like for a poor naked girl who only gets to live for as long as she can stay on her tiptoes, you can get this movie and see for yourself!

These hanging scenes are not as easy or safe to shoot as Visegrip makes it look.  Things go wrong, straps slip, ropes stretch, strangulation gets real, and models might need immediate help.  This is a short series of such moments when a fast rescue was required while filming with Bby9irl.  These happened while we were developing a new system for mitigated real hangings, and these shots happened before the bugs were worked out.

This site contains adult content of a disturbing nature to some. It contains depictions of nudity and simulated violence. By verifying that you are over 18 and it is legal to view such content in your jurisdiction, you agree that you will not be harmed by such content, nor induced to replicate any of the acts contained herein, and you assume all legal or civil liability for any results of viewing this site. If you do not agree, then please leave the site.